October 09, 2018
I feel like my entry into the world of bicycles has been tumultuous yet uninformed, a crash course of sorts with a hint of skepticism- did I live through the dark ages or did I miss it all together??....I cut my teeth on the hideous sight of 100mm stems, Y-frames, Panaracer tires and Blue Ano Kooka parts when I was arguably too young to even understand the novelty. Pacific Blue was on TV and was on heavy rotation in my Summers-off-elementary school Tv lexicon. I still get a case of gripping nostalgia when I see a Schwinn Homegrown logo- especially that little tomato they used. I can almost see the reflection of my 10 year old self in that sparkly bass boat paint... This feeling was revived when I met the new breed of Pivot's line up just years ago. Previously, I knew Pivot to be a cornerstone of practicality in design. These principles seemed to outlast their frames and were much better looking than the bikes themselves. Despite all the praise their Mach 5.7 was getting, I just couldnt get into them. It was when a customer ordered a Mach 6 Carbon that I came face to face with all the ways that pivot was doing it right. The details, the lines, the spec... all just beautiful. This wasn't the Pivot I remembered, there was evidence of a serious shift right there in my clamp. This trend viciously continued with heavy hitters like the 429sl and the LES and the last elephant left the room with the re-design of the Firebird. Their bikes are badass point blank, they ride extremely well. The company is awesome and I can't say enough about their QC process. Pivot seems to have served as a touch stone for yesteryear.  A true mark of how far bikes have come even since 5 years ago.

The 429sl turned me on to riding short travel 29ers. Despite the steep headtube angle and racy accoutrement, this thing answered the questions I was trying to ask all along. The quickness, smoothness and precision of this bike made riding the undulating single track around here as fun as pointing a much bigger bike downhill outright. So I was hooked. The 429 trail came along shortly thereafter and further perfected this format. Due to availability and budget not coinciding, I bought several bikes that I felt emulated the 429trail. They sufficed as my go-to bikes to certain extents but certainly fell short of any of Pivots offerings at the time.

With the release of the 5.5 we witnessed another notable shift in Pivots designs. The lines got straighter and the tubes assumed a more square shape. Pivots logo/name was only seen a few places on the bike rather than 10+. I remember looking at the 5.5 thinking "man I wish they would make a 29er that looked this good". Someone heard me. The Trail 429 was the answer to all my hopes. First glance was promising and all the on-paper details aligned beautifully. The spec very closely mirrored what we see across Pivots lineup and the price schedule showed no departure from their usual rudiment.

I got a relatively early chance to demo at Dirt Fest in WVA and was blown away by the bikes performance and in-person appearance. With the first impression checklist having gone so swimmingly, I was allowed to fully delve into what made this bike so awesome.

If you are at all sticking to namesake of the former 429 Trail to make any assumptions, I could only agree that this informs the awesomeness of Pivots overall lineup and bears only vague similarity in ride characteristic- lets have a look at stats. The Trail 429 as it compares to the 429 Trail has been treated with a steeper seat tube angle, slacker head tube angle, slightly taller BB, shorter chainstays and subsequently longer wheelbase as well as a bump to 120mm of travel in the rear. The Trail also features a rear axle spacing now seen on two of their other models- SuperBoostPlus (157x12) which Pivot outlines with great confidence the benefit and defense of this new spacing. As mentioned before, we see tube shape and over all bike look set itself further apart from its predecessor. Internal cable routing and sharper corners will be an obvious standout with the new Trail. As far as performance, we will see a lot of familiarity get tremendously expounded upon from the 429 of yore.

I recently took delivery of a Trail429 XT/XTR Pro build as my personal bike, I opted for the DPX2 upgrade as well as the Reynolds Carbon/ I9 wheel set. Out of the box, the DPX 2 and Fox 34 were setup per Pivots Suspension Setup Guide, along with their intuitive sag gauge- setup was fairly simple and provided a decent, familiar ride quality almost immediately. The short rear end provides the rider with a noticeable snappiness and the longer front end keeps things rounded and stable. The bike seems naturally "acquainted" with every type of terrain on which its ridden and its eagerness to bound up punchy climbs and negotiate tight maneuvers- up or down, makes it extremely rewarding to leave the hammer down at all times. Having previously tested the bike sans carbon wheels reinforced that while carbon is not requisite- it certainly sweetens, lightens and stiffens the deal.. This is a tough sell though- the DT Swiss alloy wheel setup that typically ships with the bike is hard to beat. As mentioned before, this bike rewards hammer-down style riding as it responds exquisitely to hard pedal inputs and affirmative line choices. I find myself riding much more aggressively as a result.

As ride time mounted, I began to delve into a more pinpointed setup. At 230lbs I found the fork to be a little dive-y and the rebound of the rear shock to be slightly incongruent with my riding style. After spending some time under the thinking cap, I decided that a larger air volume spacer in the rear shock would not only give me a plusher beginning-of-stroke and better progressivity but also effectively cause the linear tuned shim stack to speed up flow at the beginning of the return stroke while maintaining the slower rebound that Pivot likes under regular trail input- this gave me the "pop" I was looking for while preserving a planted, collected feel through the rough stuff- the compression setting suggestions that Pivot offers cannot be understated here, with sag gauge minded and setting suggestions heeded, my rear shock was dialed. As for the fork- I added 1 spacer, followed the chart on the actual fork leg and wound the compression in just a few clicks further than suggested. The bike now pedals and handles spectacularly all while being extremely plush and compliant in the chunder.

Overall, this bike is an extremely strong contender for best I've ever owned or ridden. Versatility, form and overall performance make a strong case for consideration for YOUR next bike as well. 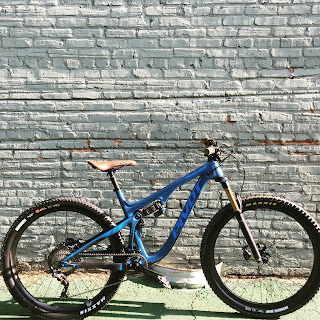 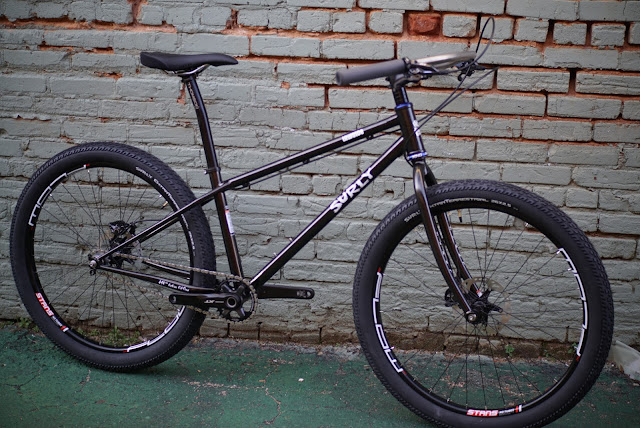 This winter has been brutal. Ive watched all the paint dry and the phone doesn't seem to even ring anymore. Lack of sunlight and dry trails has kept the masses focused on football, arguing on the internet and putting miles on the indoor trainer. Needless to say- along with the waned desire to ride, the desire to patronize a bike shop for anything beyond a necessary repair is somewhat rare these days. I guess its hard to get inspired to spend money on a better bike or making your bike better when riding seems to be but a distant memory. The bright side of these dark days is that time is plentiful, projects get more focus than usual and new ideas seem to be getting a lot more attention than usual. Said surplus of time has allowed me to give customers my undivided attention and take some fun chances and risks that a tight schedule usually prohibits.    A few weeks back I received a phone call from a calm gentleman by the name of Chris. He asked some relatively general questions 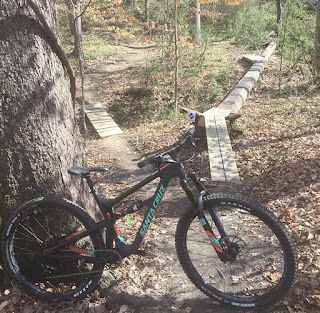 The Santa Cruz Hightower tends to blend into the fray of low slung and long trail bikes that seem to be slowly making their way into the bike markets. My most recent test ride on the 29" variation of the Hightower revealed that this bike deserve a podium spot when it comes to considering your next purchase. I'll be the first to admit that it's hard to impress someone that is loyal to the greatness of the DW and Maestro linkages found on the other two brands we sell- as I am still convinced they are second to none. However I was blown away by the performance of the VPP (virtual pivot point) found on the Santa Cruz Hightower. 135mm of really smooth, trail eating, responsive goodness to be exact.  I set up the RockShox Monarch rt3 at the yonder most suggested sag of 18mm- this choice lent itself to the smoothest rip of Rocky Branch I have had to date. This choice also, however, influenced a slightly "lazier" feel when really stepping on the gas. That being said, si 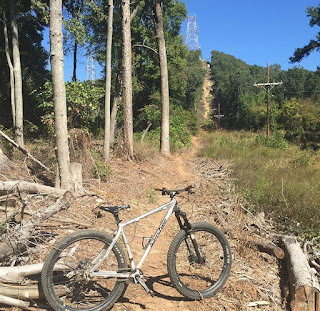